For a brief period in undergrad, my friends and I used to play FIFA on our laptops. It's great to have your own in-house LAN tournaments. We did it once in a while just to kill time and chill out. Did I also mention that it's a lot of fun? Anyways, I sucked big time when we started out. The good thing was all my friends sucked at it as well. It helped level the playing field. One particular hot and miserable Trichy afternoon, my roommate (Naresh) and I were playing FIFA on our own laptops against the PC. I paused my game to see how he was doing. I think he was trailing by a goal or so, but then mentioned something interesting. He was playing with the difficulty set to Professional. No wonder he was behind! Btw, I was killing it in Semi-Pro :P When I asked him why, he said sem-pro was easy and world-class was too hard. So he picked a happy medium - a level which he could win at sometimes, but has to slog through to barely keep up. All this happened in a nonchalant manner. I would've probably forgotten that conversation if I hadn't tried what he said. I increased the difficulty of my games and lost way more often. But when I went to play with my friends, I was doing way better! 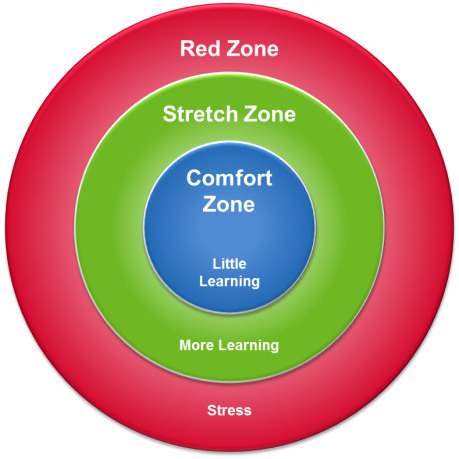 Be it fitness activities or practice coding tests, I've always found that I learned best when I was in the stretch zone. In all these situations, we already have a set of skills that can be further improved with practice and effort. But self-guided training in itself may not be optimal. Sometimes, a friend or a teacher was able to help me whenever I got stuck. They were able to pin-point my mistakes accurately and further improved my capabilities.

Later, I came across an article about the Zone of Proximal Development introduced by the psychologist Lev Vygotsky. According to this theory, we learn fast when guided by those who are more knowledgeable and skilled. Intuitively it makes sense. I can personally attest to the fact that working hard with/under the guidance of smart people is the fastest way to learn. Atleast, that's the fastest way I've ever learned.

There are three factors that are essential to this learning process:

Neat little theory isn't it :) In summary, break down the task into small, doable chunks that push you out of your comfort zone, work in a collaborative environment with smart folks and enjoy the process!