P.S: I'm hoping that you (my dear reader) would overlook the irony of writing an article in English about my Tamil identity. My reasons for doing so would be obvious in the next couple of paragraphs. I might ramble ahead to a point that I feel is important. You might find these digressions charming, distracting or just shoddy writing. Either way, I hope this resonates with you on some level.

A bit of my background

I was born and raised in Chennai (சென்னை), Tamil Nadu, India. I look down on cities like Trichy, in fact I'd go one step further and claim that Trichy (திருச்சி) is not a city. It's hot, a lot more conservative and nothing is open after 9pm. Barring a few magnificent temples, mosques and churches, there's not much to do there. Coming to the point, I was one of the metropolitan city-breds who studied in an English medium school. Essentially, I'm yet another product of the CBSE system. As a convent educated idiot, my English is better than my Tamil. To elaborate, I speak better in Tamil, but I wouldn't last 5mins without using a couple of English words/phrases in between. I struggle when I try to write in Tamil. I do occasionally read books in Tamil, but I read much faster in English though.

Avvaiyar(ஔவையார்), one of the most respected female tamil poets during the Sangam Tamil era penned this in 1st Century CE and it's still as relevant today as it was back then. Here I am, in Toronto, 13000+kms away seeking knowledge and fortune. I've been lucky enough to have visited 7+ countries so far (conferences, business and personal) and I'm grateful for it. Something about traveling gets you in a retrospective mood. It brings out the stuff you've been struggling with sub-consciously, memories buried deep inside. Ever since I moved to Canada, a small part of me has been screaming at the top if its lungs that I'm out of touch with my roots and history. I missed hearing Tamil in the background, I missed lazing around in the sultry weather eating fried, savory Indian snacks and most of all, I missed the people.

When I moved to Edmonton in August 2015, I had just graduated from NIT Trichy. One of my psychotic thesis advisors had screwed me over my grade and I was fuming about our abysmal education system. In fact, I couldn't wait to get out and see the world. I was excited about taking new courses taught by AAAI fellows. I was finally going to get teachers who were more interested in education rather than dress code and "discipline". Everything western seemed better (the grass felt greener on the other side). I was frustrated with everything broken in India, especially Tamil Nadu and I couldn't wait to pursue the American Dream (Technically, in Canada, but it's still like a smaller, more polite brother of the USA).

This too shall pass...

And surely it did. The novelty wore off after a couple of months. My academic life was fantastic, but my social life almost non-existent. I did meet a lot of nice, interesting people from different countries, but I still missed my friends. My music library which usually had classic and psychedelic rock, metal and top 40 crap was undergoing a transition. I started downloading older Tamil songs. I don't mean just Ilayaraja, it went as far as M.S. Viswanathan, P.B. Srinivas and a couple others. My top 25 most played songs were 90% Tamil now and the highlight of my day was watching an 80s Bhagyaraj movie, old comedy scenes involving Goundamani, Senthil, Vivek, Karthik or Vadivelu, or a cult scene from Thevar Magan, Padayappa, Nayakan, etc. I used to revel (I still do for that matter) in joys of Tamil lyrics and poetry. It's amazing how I derived the greatest pleasure from the smallest things - an old tamil movie, jotting down poetry in Tamil, an obscure tamil song, Kamal Haasan's unbelievable command over Tamil, etc. I'd listen to Tamil rhetoric spewed by politicians just to hear them talk without using one English word. It was unbelievable to witness. I couldn't talk for 5mins without a couple dozen English words interspersed in between.

Don't get me wrong, I'm proud of my command over English. While I don't speak as well as I'd like to (apparently, I speak like an immigrant who moved here during high school, which is pretty good, but not good enough for me), my writing is well above-average. If I put my mind to it, I'm sure I could stand toe to toe with Shashi Tharoor and have an engaging conversation. But the embarrassing part for me is that my command over Tamil is not even close. I was just another brick in the wall manufactured by the Macaulay education system in India. While I spoke in Tamil with my friends, I was writing in English, reading English fiction and completely happy to stop learning Tamil as a subject after 10th grade. My only saving grace was that I didn't directly equate command over English to class and intellect (the reason why deserves an article of its own). I don't pull the crap that a lot of techies/MNC employees in India do. If I'm talking to someone who is fluent in Tamil, I speak to them in Tamil even if they respond only in English (Yes, there are a lot of Indians out there who take perverse pride in the fact that they prefer English over their native tongue). Command over a language is definitely sexy - it's intellectually appealing. But the language could be anything.

Time to start improving my Tamizh

First step in solving any problem is recognizing there is one. I may have realized this a little later than I should have, but I intend to take incremental steps towards building my knowledge of Thamizh. I have started reading books, blogs and articles in Tamil. I have plans to write a bunch of posts in Tamil, translate and/or transcribe song lyrics in Tamil, etc. Maybe not the best way to go about it, but it's currently the most feasible option for me.

An oft-repeated quote in Dravidian identity politics. I don't believe in taking pride in things I'm not directly responsible for. My Tamil identity started out as an accident of birth. There's a certain elegance, charm, a beauty if you will to the language. And I can definitely take pride if my command over Tamil is extraordinary, if my Tamilian experience shapes me into a better person. I've come to peace with my identity as a urban tamizhan. While probably not as charismatic or affluent as the protagonists in Mani Ratnam's or Gautham Vasudev Menon's movies, my upbringing is closer to urban, middle-class upbringing portrayed in their films. 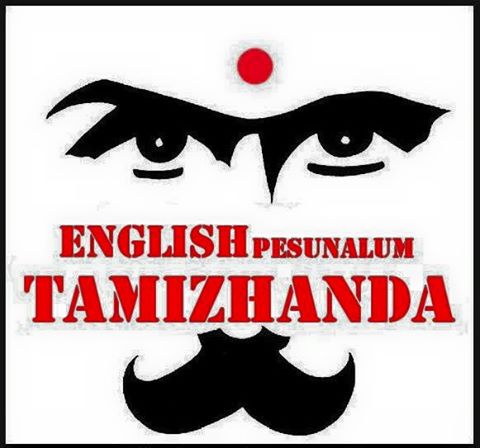 If I remember correctly, the artist Hiphop Tamizha made this phrase popular - English pesinalum Tamizhan da (I may speak in English, nevertheless a Tamilian). I feel uneasy taking pride in things that were out of my control. While the lyricist Adhi's heart might be in the right place, I'm apprehensive about taking linguistic and parochial identities - its a slippery slope which at its worst leads to casteism and racism. On the other hand, I don't believe in the fake "I'm a global citizen" crap either. While few manage to really live their lives as global citizens, most who claim to be global citizens are pretentious idiots. These are the folks who like being global citizens as long as they can live in "first world" nations. I don't think my Tamil sensibilities could ever be completely erased. Once in a while, it just jumps out of me, when I least expect it.

So what am I getting at? Honestly, I do not know. I'm just trying to figure out who I am. We all have our comfort zones, innocuous idiosyncrasies that define who we are. Most of mine were shaped in Tamil Nadu. I guess its time to start devoting a considerable portion of my mental faculties towards improving my Tamil. Atleast, I know it'll help me stay in touch with my roots. To my Tamil readers, I'm going to leave you with an excerpt from one of my favourite poems by Mahakavi Bharthiyar (மஹாகவி பாரதியார்). Additional credits to தமிழ் இதழ்:

Of all the languages I know,
there is none as mellifluous as Tamil;
Like laymen, beasts, when the entire world
is treating us with derision,
is it right to call ourselves as Tamilians
and live here this way? Tell me!
We have to help spread the melodious sound
of Tamil all over the world.

It is important to keep in mind that Bharathiyar lived from 1882-1921. He started publishing poems regularly in Tamil weekly newspapers in 1907 and wrote quite a bit about Russian, French revolutions, relationship between God and Man, etc. If you were a little alarmed by the nationalist tone of the poem, remember that this was written when India was under the rule of the British empire. India was under the yoke of the colonial masters, the men and women subjected to unbelievable horrors and treated like savages. Given the context, I'm surprised he managed to keep the hatred out of this poem. He penned such passionate verses in Tamil - so much so that they still reverberate in Tamil consciousness. Movies still reference his work, politicians mis-quote him for their selfish gains, men & women are still inspired by it! Words have power, and Bharathiyar wielded them with unbelievable panache and potency. It's high time I learn from the legendary Tamizhans who came before me.