I love eureka moments. All of a sudden, everything just clicks. The brain has a sudden flash of insight, makes novel connections between concepts and et voila - magic happens. But this post isn't about eureka moments. It's about a sudden realization that I had grown up, turned into an adult.

I was in Pittsburgh, Pennsylvania visiting Vishaal and Ramkumar for the Labor Day weekend. I took 2 additional days off to hangout with them and was super psyched about it. The previous couple of months had been especially rough. I was desperately in need of a break. We were going to an A.R. Rahman concert, do touristy stuff then party in Washington DC followed by hiking at Shenandoah National Park (desrves an additional post!).

Anyway, it was Saturday night and we were walking near the Lincoln Memorial, Washington Monument area. It was raining cats and dogs and we were running for cover. We were all stuck there until the rains stopped and talked about random stuff. We were talking about our mutual friends and what they were all up to. Some had done way better than I expected, some were doing alright and a few were in a tough spot. It's always sad when your things aren't going too well for a friend. It was quite depressing to hear that news. It shook me to the core. Once it started to sink in, we talked about mistakes, owning up to our own shit and taking responsibility. Well, I didn't have my eureka moment then. Don't really know how it happened, but we eventually moved on to different topics, shared a few laughs and had a blast at partying that night.

When I was finally on my way back to Toronto, stuck in a flight with nothing to do, I had the time to be introspective. My mind took me back to our original conversation. And then it all became clear. Crystal. It was a little painful to realize that most of my failures were caused by my own inaction or faults. I had to take responsibility. I know that life is unfair. I do know that luck can play a huge factor. It's comforting to think or even believe that we are all born equal. But some just have it easier. Almost like playing a game with cheat codes. A nurturing environment with abundant resources works wonders. Unfortunately we do not start at a level playing field. All we can really hope for is that when a rare opportunity comes knocking, we better be prepared. And I wasn't a 100% prepared when I failed a few times in spectacular fashion.

P.S: I found this comic a few weeks later. Absolutely loved it. 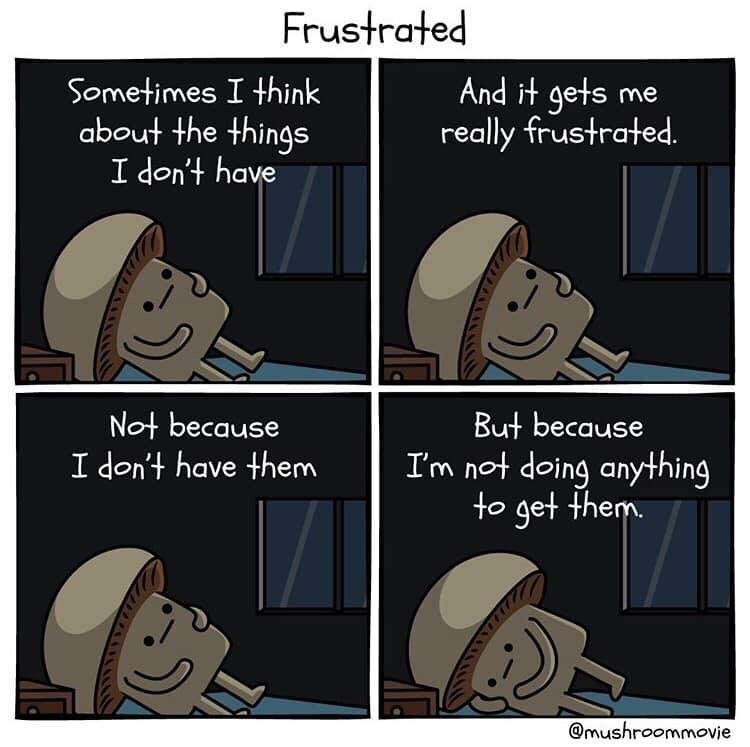